RaysonTeacher.org - Articles - The Arc of Infinity

Rayson: “Do You Need to Know This?” The ARC OF INFINITY 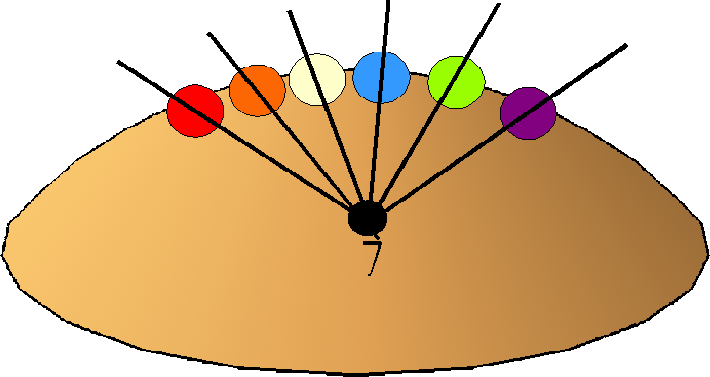 Central Control of the Master Universe consists of five space areas of which time and space is the first outside of a perfect universe called Havona which directly surrounds the major materialization that is the gravity control of matter, spirit, and personality. The central materialization, called Paradise, is 100K light years wide and close to one million Light Years long, and peripheral Paradise is close to thirty thousand light years high. It is hollow and contains the work stations of over one trillion entities designed to maintain the Master Universe at all costs and possibilities of disasters or catastrophes.

Infinity - Basic Description must include the use of words “attenuators” “Descriptors” “Vectors” and inclusion of the operation of differentials, variables, modifiers, attenuators, qualifiers, or diminishers. It is not delimited or expandable and must be assured that nothing else is available beside it that is not exclusory of its demands as totality. Other words that apply: inceptors, decisive ruminators, repleteness, indissoluble. AND many others. Infinity is the ideal of the present Master Universe and the time Grand Universe as it is called. Infinity has no location nor does it have motion. Space is close to being a transcendental, but there is no space of Infinity or in infinity. It is a much misunderstood term and is confused by too many on earth with endless strings of numbers. It has nothing to do with numbers and uses no sense of mathematical relationships whatsoever.

The Arc of Infinity

There is a poster at the end of this article to look at. It is a rarified description of just how Paradise advises the rest of the Master Universe that it is Infinite, and therefore not transmissible to the material sectors of the time-space zones just outside of Havona and the deep series of dark gravity bodies that protect Paradise from the direct view of telescopes from earth, or Urantia as we call earth these days.

To the average person, the opening paragraph makes no sense but it is correct to the higher levels of universe administration in order to maintain control over the many manifestation of energy and light. Rayson is a Magisterial Son with a particular interest in matter and how it manifests itself. To understand matter in its Infinity, the reader has to understand that Infinity has to manifest itself, somehow, within material objects even like with a rock. To do this the central control of the universe we call Paradise, it can and does have the power to control everything, but it cannot manifest all things to the level of a human being, since we are the most restricted type of God knowing creature that exists.

The Poster shown at the bottom of this article cuts the monolith it is, in half right through its waist line. It originates matter and everything else from its own energy well located on Nether Paradise which we cut away. It’s there to put furniture into space like galaxies and planets and dark space bodies and also to prevent catastrophic collisions from happening too. They happen anyway and special beings so powerful are created to walk into these firestorms and tame them. The Eternal Deities populate those rocks we can breathe on out in space with living and learning entities working to comprehend their being by developing the idea of science and the idea of transubstantiation; that is, what you eat and drink is of the star you live near. We live animated and the rock just lies there. Both have their point as a volume in space. But both are related if only by materials.

The posters we show above and below in this article have to look at could be drawn differently, and we show them simple and complex. Your choice is just how much you want to know. Why the graphic artist took this path to showing the poster at the end. How the central universe controls all reality levels through their infinite connections, is known only to the individual. We both color-code the idea, but the sophistication of the bottom poster makes it pretty too. In actual fact the poster could be drawn without stripes of individual colors of the legal reality systems (i.e. those invented by All That Is, and not a man at the bar). The legal realities consist of just three, but wait to you see them.

All three are experiential. Only the Godheads can kibitz from outside of experiential realities. One could call the three basic realities tests of understanding and then doing something like you really know why and are very good at it . . . . eventually.

Basic Classifications are:
1 = Time and Space. Beginnings and Endings.
2 = Absonite. That’s not in the dictionary because man never thought of it as possible, but that is what develops after time and space are done, and it is a huge universe age to develop with it as it tends to perfect what time and space could not fathom. It takes what evolved in time and plays it back and inserts improvements in outcome. Absonite. You just have to memorize it.
3 = Absolute. That comes after the Age of the Absonites. Time is about one third experienced before it is exhausted; the Absonite will take ten times what time took to exhaust. The Absolutes are really parts of Infinity being experienced by perfected humans and many other types that used to learn by steps and working as journeymen and women time players, slaves, and Corona virus catchers, ending it finally and now getting through two universe ages in school. We then meet the last experiential universe age, that is about what can you understand about being in Infinity? I do not know how to tell you about that but that is what the Absolute Universe Age will teach you over, not years, but decades of deciding if you want to even move to get the news on.

The Poster called the Arc of Infinity explains just how Paradise arises to overcome the differential of space and time. That is especially to live in a Master Universe so full of experience, it now can go on to something never revealed until now: Post Infinity. That is all the reader will get now.

Space, but not time, is in all reality levels except in the Control Universe at the center of all things. There space is absent and time never talked about.

With that said, realize that Paradise has functional purposes for all of the Master Universe. The Master Universe never leaves out anything it needs to project reality for at least in seven different versions; I said three before, which are the basic ones. But there are four more in-between ones which are the stepping stones inside one of three. In another words, matter mixes with spirit to form more than molecules and atoms, but it is neither all matter or all spirit or all seeing just yet, even when most of the three are developed. The Absolutes—all seven of them—can be all seeing but not the rest of us, since that takes more than three universe ages of study to have. Frankly, “all-seeing” exists in those who are self-caused and the rest of us listen to forecasts.

All of these reality levels with their strange practices and manifestations are stages going toward getting comfortable with living someday as a transformed human into some transcendent absolute being (maybe: people are different and so are destinies), that we become as we may find ourselves in a remade universe of meanings and doings.

That takes some recipe to mix up from your kit bag of ingredients of survival and learning and service. The Master Universe teachers allow millennia to take your time and to get comfy with what you go through to do it all.

There are vast ideals to examine and relationships new to comprehend which leaves us working on our own reality level as ascenders and doers but never boring if we keep pace. We learn not to be disoriented by change and leave the idea of a couch potato and the immobility of purpose behind.

We humans are sophisticated enough now to know we are a molecular substance with a brain, but yet hardly able to know what to do with it really after 80 years, more or less, battling what we have to do. That said, the poster called the Arc of Infinity is worth a read anyhow. The Poster idea is and has no practical application for a rest with a cup of coffee, that is, until the question arises on a bad hair day, “what are we doing?” much less, and, “Why?” Like the movie, 2001: A Space Odyssey, that black monolith left in the middle of nowhere, bothers no one here, but to many, they hung on every word of Clark to tell them why. But that is you, dear reader, a million years from now. That monolith is 100,000 light years wide and the Star Child has always been you.


Poster by A Graphic Artist Who Shows More Detail 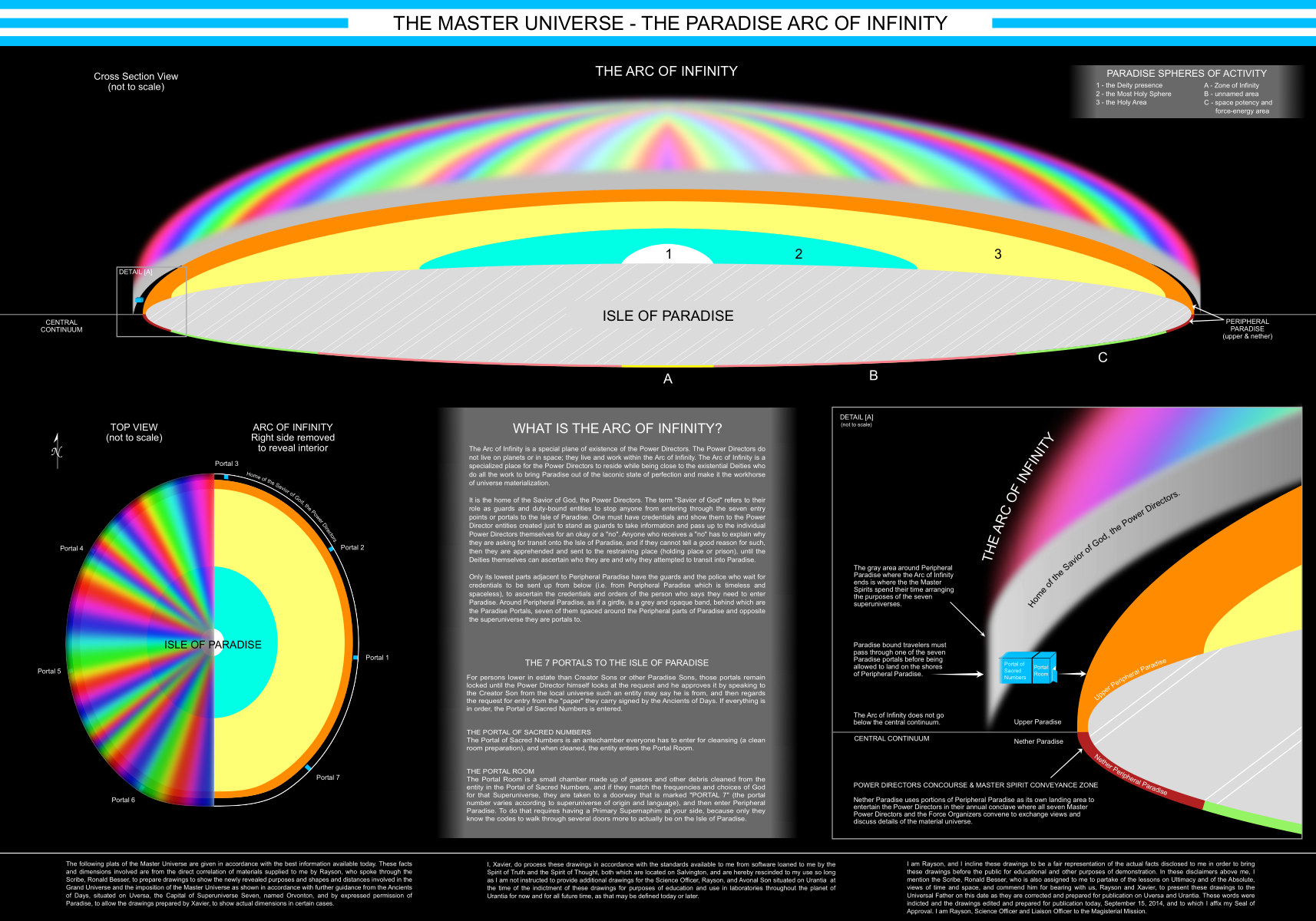