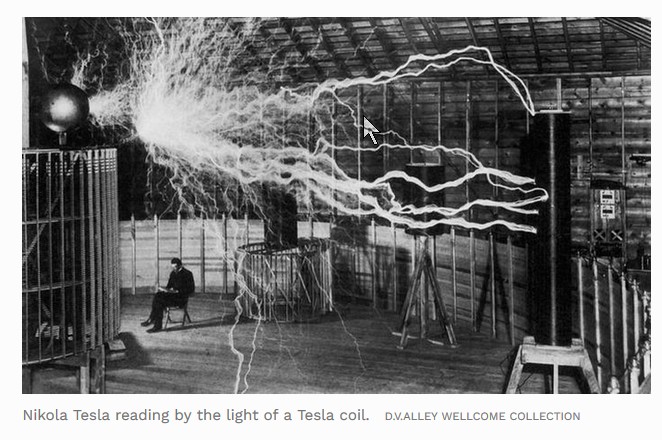 We write beneath a photo of Tesla reading by the light of a Tesla coil experiment at the Colorado Springs Laboratory in 1899. That date is assumed by a excited supporter of the Tesla experiments, but Rayson dates it to 1932 in New Jersey as further noted below. Nonetheless, it is a photo famous for its spectacular size and the immense cloud of sparks set off by the Tesla-designed coil which gathered free radical electromagnetism from the air. For some of us it reminds us of the Frakenstein movies of the same era when they open the skylights to create life for something that was not paying taxes anymore.

We would like to point to our reader there are two different experiments going on here at the very least:

The first experiment is to decide just how far the lightning can jump as from one Tesla oil to the other. We estimate in this photo the sparks jumped fifteen or maybe twenty feet.

The second experiment was a personal quest by Tesla to understand the truth about visible light. Was lightning of the same frequency as sun light white light? He read in its presence often to see if it made any magnetic difference to his comprehension and to determine it was also a natural lamp by light standards alone. That was Tesla as a magnetic personality and his insistence there was a way to create energy for use that was easier to find than what man was doing with it during his life on earth.

We now introduce the divine Magisterial Science Officer to further comment on the use of enegy as Tesla saw it, and the idea he botched no experiment at all but misunderstood what he found in spite of it being as plain as day light what was really happening.

For instance, his idea of an aether (his spelling of “ether” which is an old Aristotle idea thousands of years before but rescinded by modern science lately), was that it held all the energy you ever wanted if you could transfer it to a useful means of transmission. Rayson now disseminates the idea that this planet you and I live and breathe on, is ripe to learn how to use energy better and more efficiently, and turn to his voice to hear more:

RAYSON:
“I am the Science Officer of the Magisterial Mission, and I am, myself, a Magisterial Son of some preponderance over the human named Nikola Tesla, as he represents the high mark of experimentation of fresh energy use and approach never realized again on your planet Urantia. The man was brilliant in all aspects, and his curiosity knew no bounds. This Paper then is about how Tesla trialed the idea of zero point energy idea, only to discover he found a curious phenomena that to this day is absolutely a mystery even to the scientists of the 21st century.

We write this not under protest but under the curious version of staff programs that allow me to speak to phenomenon on earth that carries significant views to the future, and in particular, this photo inspires the Science Officer, to the probability of explaining just what you are seeing in this eerie photograph.

Our acknowledgment about the photo at the top says it was likely taken in 1899, but our spirit archive shows it was actually taken in 1932 in his New Jersey Laboratory. It never occurred to him that what he was producing was not zero point energy, but that the aether as he called it at times was releasing latent photo-magnetic series of transformers that occur naturally in the air all around you on the surface of earth we call Urantia (You Ran Sha).

The Nature of Electromagnetism Tesla Discovered

It is difficult to describe what electromagnetism is. But we can say electromagnetism is generated, not earth's interaction with the sun, but with earth's preponderance to have a magnetic earth core at the center of the sphere you call earth. Earth uses the friction of a molten metallic ball that is now so hot it at times acts more like a plasma. At times it reaches what is euphemistically called the electronic boiling point. While we know what that is, few even in spirit recognize that when something in a material area of life reaches that point, there is grave danger something explodes. That is the fear for Urantia these days and on top of that scare, is the likelihood the planet will start to rearrange its tectonic plates, and that condition was forecast to happen in the 1940's by Edgar Cayce in particular.

Electromagnetism is generated by the friction inside the chamber that surrounds the magma-like core, and the chamber itself sometimes begins to melt even though it is made of, not rock, but a tempered steel-like vessel without any specific measurement, for at any one time, its shape is in variance with what it once was, and it continuously reshapes. Electromagnetism results after the heated magma condition allows the steel chamber to erupt slightly to transfer the static electricity inherent in all earthly materials, to discharge to the surface of the planet.

What science sees then is the odd declaration of things like “ball lightning,” and other phenomenon like Saint Elmo's fire, and that is lighting up swamp gas, and that exposition of fire and light can move like a wraith over the surface for miles around a swamp and scare the be jabbers out of residents who happen to glimpse it before it is extinguished by a gust of wind or a nautical downpour of torrential rain.

But Electromagnetism is also a discrete evolutionary-style phenomenon not seen on uninhabited planets. Jupiter in your own solar system has no electromagnetism, but there is a Jupiter moon that is really an inhabited planet, one out of fifty-three (53) discovered moons around Jupiter to date. And for curiosity sake alone we include a graphic of moons and the relativity of the size of them compared to earth. 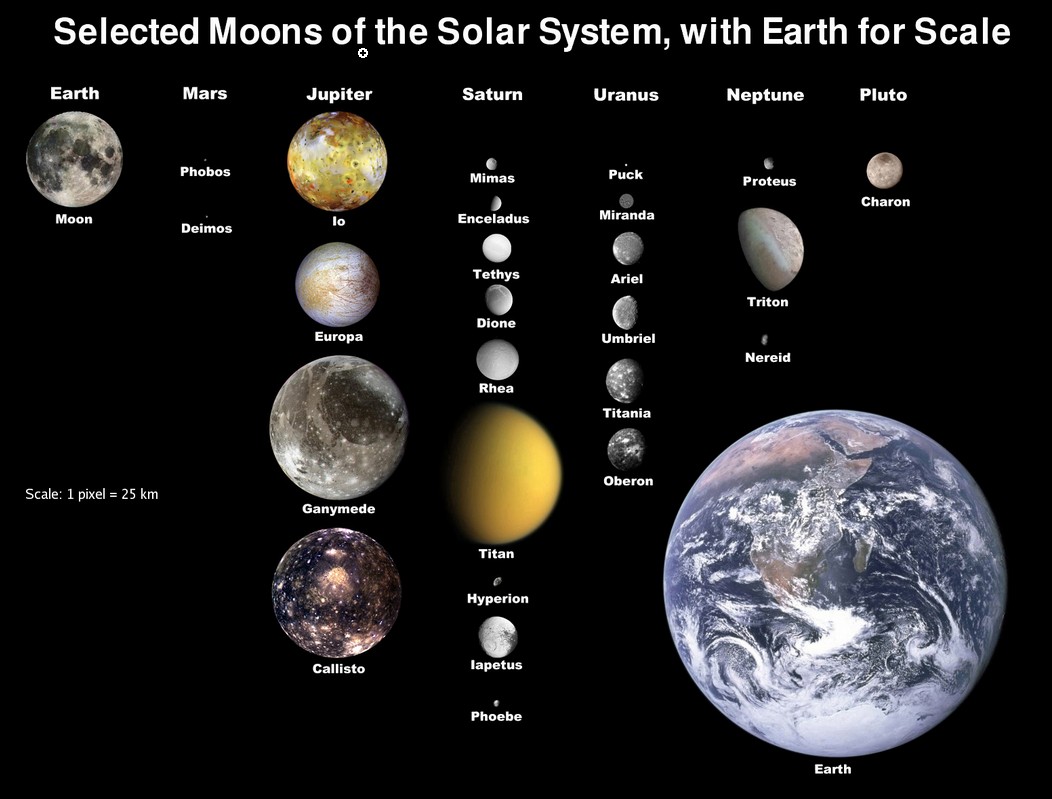 None of the Jupiter moon shown here are inhabited but one near to Ganymede is inhabited as a group of humans designed as non breathers.

Tesla debated why the earth was so difficult to assume to be a useful transmitter of sound which it could do better than energy. However he stopped work on those ideas mostly because the worlds was getting ready for a World War in 1936, and his interest in the Einstein Relativity discoveries more or less overwhelmed his mind to the end of his life in 1943. As a result of this death, Roosevelt then the President of the United States, sought the science of thermonuclear devices instead of electrical properties to defend the world from the Nazi encroachment of Europe.

“We conclude this look at electromagnetism briefly, by noting that nothing about the design of electromagnetism is ever released by the higher spirit governments to material human planets. The reason is that electromagnetism is essential to the perpetuation of life, and that even human cells carry a small charge of electrical current in order to stand well with the forces of the planet human life happens to appear. For that reason our porposed discussion concerning the Tesla experiments is now relegated to the generation of electricity. Tesla correctly hit on the right idea of using a tall antenna shaft to transmit the naturally occurring electricity in the air to users. We now turn to that look at its feasibility.

Tesla and To Transmit Alternating Current

“Nikola Tesla hated the idea of selling electrical connections from a power station. He preferred to obtain subscribers, and then he would sell them a coil instead of a wire transmission from a central generator. It was Thomas Edison who conceived the idea of wire transfer of electrons to individual homes and to charge them for the rate of electron discharge through a volt meter. But Edison was a bit of an innocent duff over distribution ideas, for Tesla sold to Westinghouse laboratories the idea of a standard gauge coil that could make its own similar electricity, but the alternating type and not the direct current advice that Edison insisted was superior to alternating current.

“As the Science Officer of the coming divine Magisterial Mission on earth, I will recommend that we start removing nuclear power plants at once and replace them with generators that can pull electricity out of the air but that idea is not to use the Tesla coil, but instead, to distribute electricity as it is done today by wire. But how we collect it is far different than you generate it today. For that reason we will save billions of dollars of already developed methods to send and use electricity by current wire set up, and once more generate so easily and cheaplyand plentiful we no longer have to burn natural gas or fuel oil to run power stations.

“Our power stations will operate with an electrical grid hooked up to many one hundred foot high antenna towers to at least two generators each inside the facility. Those generators are standard issue generators, but they are hooked up to the one hundred foot high antenna on the outside of the power station. Be assured they are connected in a way that forces free electrons in the air to gather inside the generator, and those electrons are forced out of the inside of the generators into wires for electrical use to subscribers' homes and businesses.

“Tesla never quite grasped the idea that the aether he discovered was actually a mix of electronic shards of old atoms, bits and pieces of atomic nuclei, and hoards of tiny pre-particle sparks called Ultimatons. We name them since man never discovered them in spite of the big to-do of the Boson capture several years back at the European Collider. We note for general interest there are fourteen (14) types of Bosons, and the Collider experiment found number six type of the fourteen available to find. At the time we opined that it was seriously damaged and said so, but they are stubborn and insist it was a genuine Boson. It was but damaged and no longer a true type Boson to the point they cannot reproduce the experiment to find another Boson.

“We conclude this paper by suggesting that readers learn to discriminate between web sites which talk about Tesla, also learn that most of them are amateurs and mistake the experiments of Tesla for their own pipe dreams over the magic of electromagnetism. Leave alone anything that suggests we can derive zero point energy from what Tesla discovered.

“For instance Tesla ran that car on electrostatic power out of an old battery hooked up under the hood to an electric flywheel connected to two auxiliary electric motors on the left front wired to the rim of the metal wheel, and then to the back wheel rim on the opposite side from the first one. The battery was used out but concealed a pass through connection to the Tesla antenna that electrified the old battery by direct transference of electrical sparking as we see in the coil experiments alone. Such that it worked at all is nothing short of a miracle. Tesla thought it was his contraption that did it, but in actual fact it was electromagnetism working thanks to huge storm inside the core of the earth that day. His antenna picked up stray Ultimatons that pushed electrons into the battery easily.”