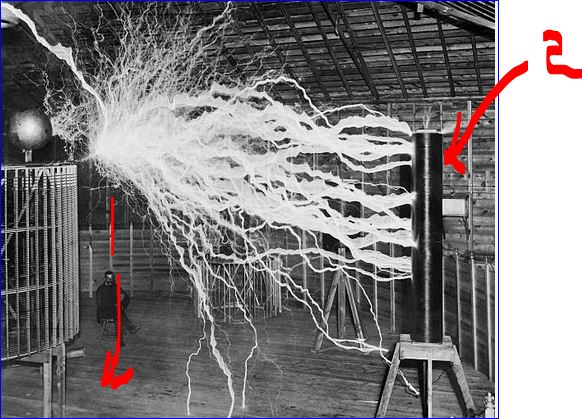 The photo is courtesy of Getty Images. See the article below for some explanations.

This is RAYSON, and today’s discussion is what Tesla called flux, and flux as he saw it, was the spray of sparks when he used the invention he called a transducer. What a transducer does is lower the resistance of the spark so it can fly off the anode to the diode. Placing the transducer on either side of the room he was working in, allowed a showy discharge of one to the other transducer.

For that reason we have two different means of electronic pulses. One: that is a spark to the diode; Two, a spark that is forced backwards to the anode not, but to a neutral point on the electrical connection board beside the experimenter.

The flux happens between the two poles called the battery anode and diode, the negative pole of the battery which is a transducer. The flux appears because the battery terminals on the transducer operate as they do in an automobile. For that reason keep the transducers apart by at least fifteen feet (15) and well back from any arching touch point beside it them or near them. Tesla tuned the experiment by insisting the air around him was under sixty-five degrees, and that the window blinds were sprayed with a dilute solution of salt water made from table salt.

These transducers are the old catalytic auto batteries and the modern ones must never be used as they can explode with this experient otherwise.

Tesla thought the flux was the result of the aether, or today ether, producing a flash out of its storage of zero point energy. Not so, but he proved another important point in electromagnetism, by forcing discussions about energy that Edison could never fathom and never bothered with.

Zero point energy is not hard to create, but not discussed here today, for it is a seasoned idea on earth, but on places like our laboratories operate, zero point energy is a nuisance we rather not deal with at all. Tesla thought he had some control over it, but not so, as he was creating flux more than anything else and he made sure no one knew not how he did that. But let us tell you how he did that. Zero point energy is not a flux; it is an electrical discharge by forcing ultimaton sparks naturally occurring in the air everywhere that can be captured to produce boundless energy for machines today.

Any battery, so long as it has a negative and positive diode attached to it, will absorb energy and give energy out when connected to. But for these experiments only the old electrolytic batteries may be used. Tesla ran the transducers as open hearted batteries and connected wires to them from his electric control board, and that is never visible in his pictures.

The Tesla electric control board had three different nails or anodes on it. He had a positive nail or metal connector open on it. He had the same for a negative pole for connections to it, and a third nail to produce what he called the idea of a transducer, and that grounded the flux so it was controllable between the other two transducers, the positive one at his desk and the negative one you see the sparks fly too.

For this reason, he could control the voltage by attaching an amp meter to the third nail and then release the positive nail to a connection that led to the transducer across the room from him. That allows the flux to jump the wire he has on the floor to the air and hence the shower of sparks you see in pictures everywhere of his experiments.

Now. The problem we have today is that the flux is available but the voltage has been tamed to 110 volts at 60 Hertz. For that reason Tesla’s experiments do not produce the glory of all those sparks of the flux crossing the room. What one has to do to get that huge shower is to use alternating current at one hundred thirty (130) volts at seventy (70) Hertz. For that reason we must obey the rules of science today and suggest anyone trying this must wear eye protection, although Tesla never did.

When we produce the flux as he had, you will at first see an arc of electricity jump from the first nail to the second nail. The third nail has no place to play in initiation. When the electric board has initiated the flux then the third nail use kicks in and a small glow around it may develop, as the third nail is producing its own supply of electricity of a different kind we call “tinker bell,” as it is light and harmless and it carries little sparks in it if it is amplified. It is harmless enough to produce a show for entertainment as it will fall around the room as fireworks do high in the sky.

If one addresses the first nail with two hundred (200) volts, and the second nail with eighty (80) Hertz or Ohms, then we have a huge flux shower from the third nail only. That will produce a flux show when we place two transducers at least fifteen-hundred feet apart and allow the current to build up briefly before hiding from the display. That display will endlessly produce tinker bell white sparks from the ceiling that float as though they are feathers on a warm calm evening.

We are quite sure there is nothing more to tell you than this:

For whatever reason, Tesla never told anyone how to produce a transducer easily. He did that easily by asking the windows in the room to act as bath water conduits and that is done by spraying the blinds in those windows with a slight salty water from a spray bottle. Never saturate but make slightly slick and you have it right. Those blinds now conduct negative forces in the flux and the room is safely contained for these experiments.

I am Rayson and we conclude this article by stating one must always wear goggles when experimenting with electricity, and the reason is this: electromagnetism has a peculiar side to it, in that it always is ready to ramp up voltage in the flux it may produce. That flux produces a white hot plasma unseen at the top ridge, and if it accidentally touches anything, it will set it on fire. The room must be at least fifteen (15) feet high and the windows at least three in number with the old-fashioned ideas of blinds and not venetian blinds. They can catch fire if you are not careful with this kind of experiment. Further, we announce that electromagnetism is fully vented only when the doors are slightly ajar and the natural molecular air can circulate around the transducers, merely batteries standing on a table. For that reason the transducers must be five feet off the floor. Then they must be true batteries such as two car batteries of the old electrotype without using modern batteries with their hale lids of electrical deference to prevent arcing. Modern batteries induce plasmas instead of electrical sparks and are more lethal than the old ones. The experimenter here needs the old electrolytic style and nothing less or more to make this work.

The experimenter must keep out of the way of the flux, and should be positioned at the electrical control board or as close as he can get for safety reasons alone.

Further, the experiment will fail if there is too much salt in the air. Beware of too much propane too, as this will set it off immediately so do not keep a gas stove in the room ever. Additional evidence suggests that Tesla almost burned his eyebrows off the first time he tried this experiment and that was by forcing heat in the room through a forced hot air system that turned on in the middle of this experiment and the room exploded in a ball of fire he caught partially in his face. Make sure no heating equipment is not operating as well as no gas in any area near by as well.

I am RAYSON and I greet another day.